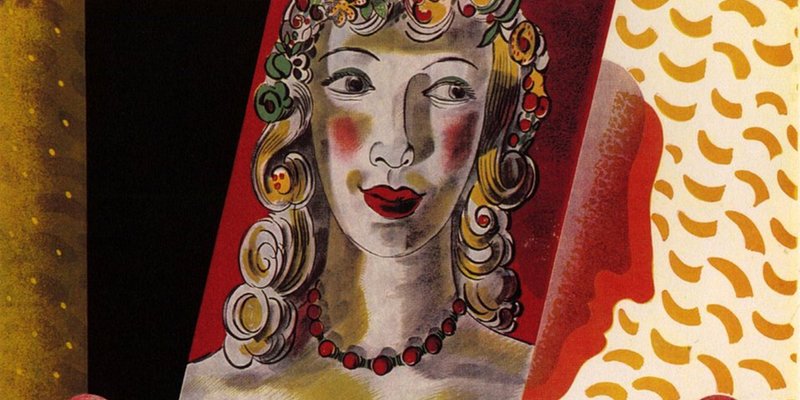 In 1997, a cache of posters was discovered behind a partition at the Art Institute of Chicago. Among the posters were over 300 created for “The Underground” in London. The first 39 posters arrived at the museum in 1919 as a gift of the Underground Electric Railways Company of London, Ltd. (UERL), which was founded in 1902. 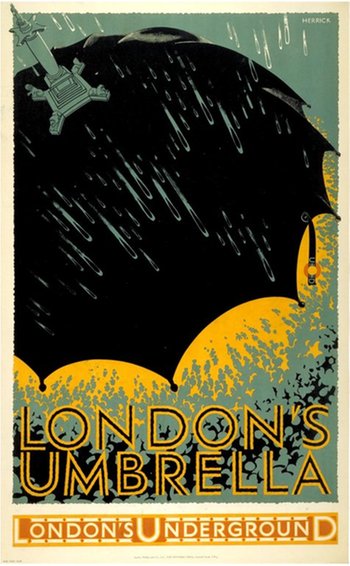 It included posters created for Underground rail trains, buses, and trams run by the company. This donation echoed that offered to the South Kensington Museum [known today as the Victoria & Albert Museum, or V&A] on October 24, 1911, when Frank Pick, the creator of the pictorial poster campaign, wrote to the director: “I have the pleasure of sending you a roll containing a selection of posters which we have issued....We shall be pleased to supply further copies...of any posters which we issue in the future if you desire them.”

In fact, the museum did desire them. Not coincidentally, the mission of the Art Institute of Chicago, an institution incorporating a school and a museum, was related to that of the V&A, which was founded as an educational resource.

Pick conceived of the pictorial poster campaign in 1908. When tasked with spreading awareness of a new map of the system and increasing ridership, he hired the popular comic-poster designer John Hassall to create the first work. Thus began the greatest sustained poster campaign in history. The primary purpose of the posters was to boost travel. Their messages encouraged journeys during off-peak hours—weekdays between 10 and 4, as well as during weekends and holidays. They also promoted leisure travel to and residence in locales on the edges of London that were now served by the company’s new train lines, busses, and trams. The campaign had the added benefit of creating goodwill.

Pick first visited Chicago in 1919, the year of the initial donation. Further gifts arrived at the museum in 1920 and continued, at irregular intervals, until 1939, when Pick left the company. Pick’s visit to Chicago, his continued gifts to the V&A, the date when the Art Institute gift ended, and his own extensive involvement with art education in the United Kingdom all suggest that Pick himself was the engine behind these donations.

Celebrating the centenary of the original gift by featuring 100 posters from the collection, Everyone’s Art Gallery: Posters of the London Underground was on view in the Prints and Drawings Galleries at the Art Institute from 25 May–5 September 2019, curated by Teri J. Edelstein.

The exhibition opened with a chronological selection of posters from 1914-1939. Highlights included MacDonald Gill’s By Paying Us Your Pennies (1914), a tour de force of cartography, calligraphy, puns, and allusions that features a discontented giraffe at the zoo who is “fed up,” acrobats at Piccadilly Circus, and a swan in search of its pen. Mary Koop was just one of numerous female artists in the exhibition, exemplifying an important aspect of the poster campaign. In her poster, a riot of brightly colored umbrellas surge towards the entrance to the Underground, hardly needing the type announcing Summer Sales Quickly Reached by Underground (1925).

“The primary purpose of the posters was to boost travel.” 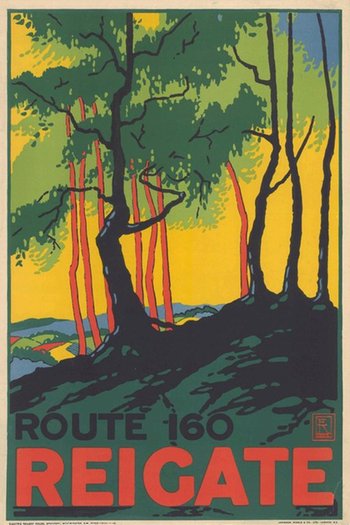 UERL employed only the finest printers for these chromolithographed posters, occasionally drawn on the stones by the artists themselves, as in Barnett Freedman’s Theatre by Underground (1936). Harold Sandys Williamson’s poster of 1939 bravely trumpets Shop Between 10 and 4, as it displays landmarks of London beneath a sky filled with barrage balloons as protection for London monuments from Nazi bombing raids.

Other galleries of the exhibition highlighted five themes and monographic sections on three artists. The zoo was one of the most popular subjects, and Dorothy Burroughes’ work is often mentioned by contemporaries, specifically because of her inspiration from Japanese art. Hampton Court was a logical destination to promote because the company’s trams reached it on the very edge of the city; a long ride meant a higher fare. Charles Paine attracted riders with a riff on history: Henry VIII is depicted as a gardener, his wives as topiary bushes, one of whom has already had her head lopped off. Some of Paine’s other eye-catching posters, with their large blocks of color and strong designs, merited their own section of the exhibition, including Trooping the Colour (1922) where Guardsmen stand against an abstracted Union Jack.

Another artist given his own gallery was Frederick Herrick. Pick submitted his posters, executed by The Baynard Press where Herrick was Head of Studio, to the 1925 World’s Fair of Paris where both the artist and the Press were awarded gold medals. The power and inventiveness of Herrick’s designs, like London’s Umbrella (1925), which shows travelers flocking to the shelter of a gigantic brolly covering Trafalgar Square,

surely helped earn the prize. Typical of Herrick’s wit, the clasp of the umbrella is the roundel sign of the Underground. Herrick’s work also appeared in a gallery dedicated to Holidays and Events. His posters and others were in the Double Royal size (25 x 40 inches), typically displayed on the outside of Underground Stations and usually printed in runs of 1,000. The company normally printed 1,500 of the slightly smaller (20 x 30 inches) Double Crown posters, which hung on the outside of buses and trams. But most holidays and events lasting a single day—like Derby Day—or others that lasted a few weeks—like the Wimbledon Tennis Championships— were promoted with very small posters in a variety of sizes. These were displayed on the inside of buses, trams, and Underground cars and therefore had much larger print runs. The small format often inspired artists to great creativity, such as the poster promoting the First Test Match at Lord’s on June 24, 26, 27 of 1939, by Clifford and Rosemary Ellis. It is in the most common size (10 x 12 inches) and had a print run of 7,500 copies. As the most prolific artist who worked for The Underground and one of the greatest poster artists of the 20th century, Edward McKnight Kauffer deserved his own prominent section. In fact, Kauffer studied at the School of the Art Institute of Chicago and might possibly have encouraged this ongoing gift of posters from the UERL to the Art Institute. Beginning with his first posters created for The Underground, including Reigate (1915), in the exhibition his work for the company ended with the atmospheric By the Rushy- Fringed Bank (1932). Museums inspired some of the greatest creations, many of them by Kauffer, whose protean style is apparent in the childlike forms of the Woolly Mammoth from the Museum of Natural History, fittingly seen against the brilliant colors of a setting sun. To promote the same museum, Austin Cooper created a magisterial butterfly.

This poster campaign not only succeeded in promoting The Underground, it gave us some of the greatest achievements in poster design, providing an enduring legacy of timeless travel posters.