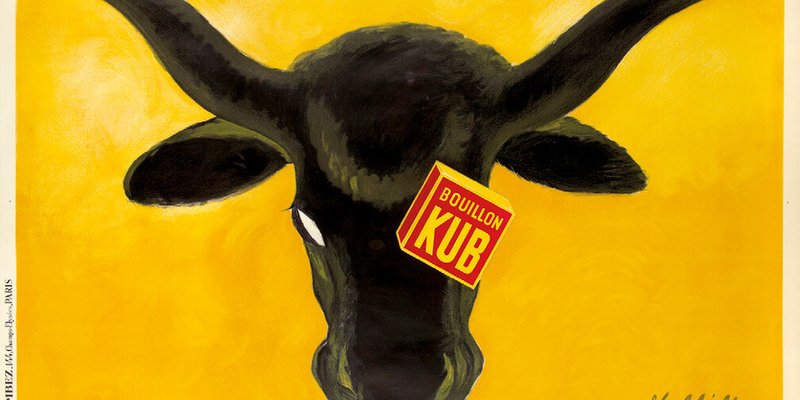 Leonetto Cappiello (1872-1942) occupies a unique niche in poster lore: he virtually invented the modern advertising poster, and worked prolifically throughout his life.

During his time, posters were ubiquitously employed as the most effective weapon in any promotional arsenal. However, only the best posters managed to do what Cappiello accomplished routinely: they capture attention immediately, and associate themselves in our minds with an advertised product or service—even though that image may have little or nothing to do with the advertised item. 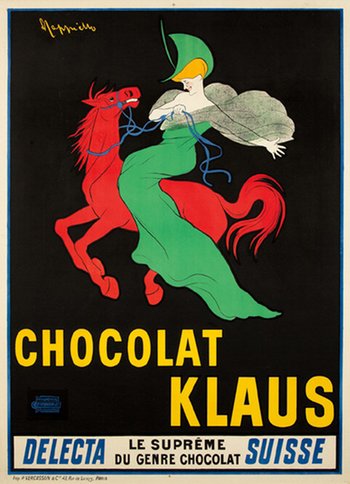 It is with this poster that Cappiello firmly established himself as the master of the modern poster—if not modern advertising itself. He begins to slowly distance himself from caricature, not only in preoccupation, but also in its form. With a newfound flamboyance of imagination, the artist pursued the posterist’s goal with a clarity and purpose that was to set him apart from all his colleagues. So powerful was this image that it became the trademark of the Chocolat Klaus company—and remains so to this date. With this poster, Cappiello declared—for all future posterists and commercial artists—a new freedom from the restrictions and limitations of the previous realist and idealized realist renderings.

Take, for instance, the 1903 Chocolat Klaus poster, which features a lady in all green riding a bright red horse—and absolutely no visual mention of chocolate, aside from the brand’s name. Our attention is arrested, our curiosity piqued, our questions left unanswered— which forces our brains to resolve the situation by attaching the image to the subject of the poster. This product identification is a vital tool in advertising: the red horse equals Chocolat Klaus instantly, and in fact, generations of young customers asked for “the green lady” chocolate.

Cappiello understood that the world at the start of the twentieth century was rapidly changing; the great strides in industry and technology created an explosion of consumer demand that had never before existed, and the marketplace was becoming fiercely competitive. Thus, the sales message that previously could be discreetly whispered now needed to be vigorously shouted—especially to those traveling quickly in moving vehicles. Synthesizing the two previous masters of the trade—Chéret and Toulouse-Lautrec—Cappiello presented a new result in his own humorous style, tinged with caricature, as a visual punch that arrested the viewer’s attention with an unexpected or incongruous image. But he always managed to keep the product central to his objective.

Most products he was asked to present seemed rather drab and mundane, so Cappiello strove to liberate them with brazen colors or outlandish forms, and to create a synthetic vision with a certain flair and rhythm. He sought an effect that would be shocking, novel, exhilarating—one that would detach itself from the surrounding posters on whatever wall the passerby saw and jump into the intended viewer’s line of vision; and from there, presumably, lodge itself somewhere in a subconscious level of perception. His work began with strictly Art Nouveau designs, albeit with a Cappiello twist: stark, saturated, and high-contrast colors made his images stand out. His forward-thinking treatment allowed his work to transition seamlessly into the Art Deco period. 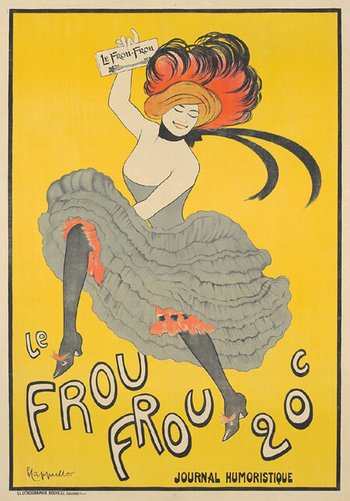 Le Frou Frou, 1899
Cappiello’s earliest poster is executed in his early magazine caricature style—which is only appropriate since it does advertise the humor periodical, Le Frou Frou—yet already his bold style shows: a flat-colored background spotlights the subject, and the pink pantaloons peeking from under the skirt create the perfect frivolous mood for the subject. “Frou Frou” after all, means “rustle,” and we are meant to hear the whir of the billowing petticoat in this design.

Folies-Bergère / Spectacle Varié, 1900 (see image in galley on the right side)
The mission of this orange-haired dancer was to attract visitors at the 1900 Paris World’s Fair to come to the Folies-Bergère. She—and Cappiello—succeeded admirably. Although all contemporary references make it clear that the Frou Frou poster was Cappiello’s first, a black-and-white flyer was issued which proclaimed this to be “The First Poster of Cappiello.” The text is full of praise, not only for this image but also for Cappiello’s career, prophetically declaring that “With Cappiello, the poster has become an object of decorative art and the first step towards an art which will become, in the near future, the public’s taste.”

“Throughout his work, there is always visual appeal...”

Today, Cappiello is in many ways the single most popular poster artist—his work is reproduced more often than even those by the more famous artists like Mucha and Toulouse-Lautrec, likely because he was a true posterist who never forgot that his purpose was to sell a product. Though his output was prodigious, and his famous works are constantly more enthusiastically received at auction, collectors today seek out his rarer works and his maquettes, which reveal his train of thought and creative process. Throughout his work, there is always visual appeal—sometimes exaggerated to create a more potent effect—and a ubiquitous dedication to communicate directly and succinctly with the consumer.

La Caisse Simon / Huîtres Exquises, 1901 (see image in galley on the right side)
To advertise an oyster merchant, Cappiello chose a shellfish sampling seashore scene—an imaginative way to give the mundane product a bit more glamour. The company, founded in 1881, had its own store in Bordeaux but shipped its wares to many locations throughout Europe, hence the space at bottom to insert the local outlet’s name.

Fleur des Neiges / Biscuits Pernot, 1905 (see image in galley on the right side)
Fleur des Neiges is one of the products of Biscuits Pernot; since it means “snow flowers,” Cappiello creates a verbal association by giving us two lovely ladies worthy of the name, their scarlet coats like blossoms in the vast whiteness. Their placement at the bottom of the vertical design with a snowy landscape allows the artist to create a brilliant impression reminiscent of classical Japanese prints of similar configuration.

Automobiles Charron Ltd. / Puteaux, ca. 1906
Fernand Charron, who won the first Gordon Bennett cup in a car of his own design in 1900, eventually took over the Automobiles Charron firm and manufactured large, comfortable—and expensive—sedans. The closed cab shown in the poster was the natural automotive evolution from a carriage design—it was very popular with the aristocracy as it exuded elegance and luxury. All of this is reinforced in Cappiello’s design, showing an elegant lady giving directions to her driver before entering the cab. The frame around the image, including the title plate, suggests that the Charron automobile is a masterpiece.

“Today, Cappiello is in many ways the single most popular poster artist...” 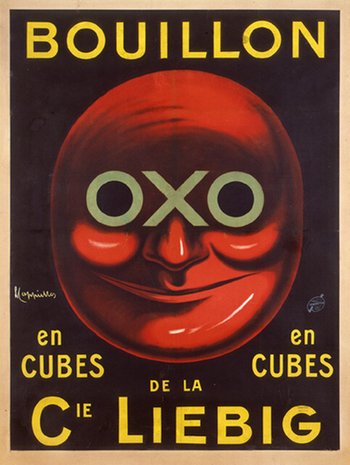 Chaussures J. B. Torrilhon, 1906 (see image in galley on the top right side)
Torrilhon started out manufacturing raincoats and waterproof rubber footwear, diversified into tire production, and then expanded massively during World War I as a a result of their rifle component output. This poster is surely one of Cappiello’s most irresistible displays of excess and amply demonstrates what can be accomplished once a vivid imagination applies itself to a marketing concept. If the amphibious leaper can improve on the quality of his already water-resilient nature with a pair of Torrilhon’s, then surely we’re convinced it would more than do the trick for our land-bound promenades.

Maurin Quina, 1906 (see image in galley on the top right side)
There’s a little devilry in any alcoholic beverage, and Cappiello used infernal imagery in a number of liquor promotions. We here have one of the artist’s classics: a most unusual green demon having a devilishly good time with the Maurin aperitif, made by Maurin-Brenas of Le Puy. What makes the devil stand out so forcefully is the almost Day-Glo quality of the colors, sparse but ever so effective.

Cinzano Vermouth, 1910 (see image in galley on the top right side)
What the red horse did for Chocolat Klaus, the zebra did for Cinzano—and for Cappiello. With a highly respected, long-established firm from his native country endorsing his unorthodox approach to advertising, he was now universally honored as a pioneer of the new bold wave of product publicists. Jacques Vienot declared it a revolutionary poster and announced that 1910 “was not only an important date in the career of Cappiello, but an important year in the history of the art of the poster.” This image for Cinzano created an instant image/product association with the public; shrewd enough to recognize that, the progressive firm used his talents again and again, and even twenty years down the road, when they merged with Florio, they called on him and used the association to their advantage with a second zebra.

Oxo, 1911
Nothing but a sort of tomato-head wearing Oxo spectacles. This must have been an unsurpassed attention grabber for the bouillon brand. And never did Cappiello more thoroughly integrate lettering and art. 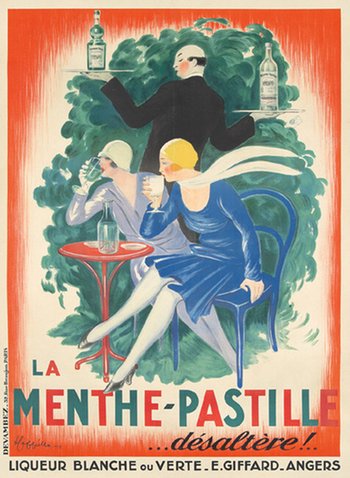 Le Nil, 1912 (see image in galley on the top right side)
Although the slogan reads “I only smoke Nil,” Nil isn’t actually a cigarette, but rather a brand of cigarette rolling paper. Nil claimed to be as “tough as an elephant’s hide,” which is how the company’s spokes-pachyderm came to be. So this was an easy marriage between product and posterist, seeing as the elephant was a favorite Cappiello attention-getter. The Joseph Bardou company introduced Nil to the public in 1887.

Cachou Lajaunie, 1920 (see image in galley on the top right side)
In Cappiello’s later years, caricature, now more polished and refined, makes an appearance every now and again. This second poster for Cachou Lajaunie, a breath freshener to counteract the effects of her cigarette, gets our attention with a woman in a startling dress decorated with large sequins in shades reminiscent of autumn foliage. “The pharmacist, Léon Lajaunie, set up his pharmacy in Toulouse. After developing several invigorating elixirs, he turned to cachou, as an aromatic for perfuming the breath whose strong flavor covered smoker’s breath” (Health Posters, p. 169).

La Baule les Pins, 1926 (see image in galley on the top right side)
To advertise the seaside resort of La Baule les Pins, Cappiello shows us a cluster of frolicking bathing beauties. The design contains a rather unusual element for Cappiello—a light paper background, against which the vividly colored bathers sprint to life. No doubt, the only appropriate shading for a beach, but unusual for Cappiello nonetheless.

La Menthe-Pastille, 1929
In contrast to the deeply-colored, nearly mystical image Cappiello created for La Menthe-Pastille in 1906, the artist, 23 years later, takes a turn towards the light-hearted with this social scene. Deeply drawn into the refreshing drinks of white and green liqueurs, these two independent young women don’t even notice that the café employee is eyeing them suspiciously. Cappiello’s usual élan is articulated quite refinedly in this image with the windblown white scarf, especially in contrast to the legs pointing in the opposite direction, creating a wing-like effect.

Kub, 1931 (see image in galley on the top right side)
This Kub poster hits the bull’s eye in more ways than one. Even for an artist who makes a specialty of astonishing the public, this was a bold gamble, but it paid off in spades as it became one of the most spectacular and arresting posters of its day. A veritable milestone in graphic design. It’s interesting to compare this with an earlier Cappiello poster for the same product. It demonstrates that fifteen years later, Cappiello’s talents hadn’t diminished, but in fact, became even more sophisticated and effective.

For the serious Cappiello collector, the artist’s grandson, Pierre Cappiello, maintains an online database of the artist’s posters and maquettes, which is available here: https://cappiello.fr/en/posters/

My book, The Posters of Leonetto Cappiello, a catalogue raisonné of the artist, is available from Posters Please, New York.