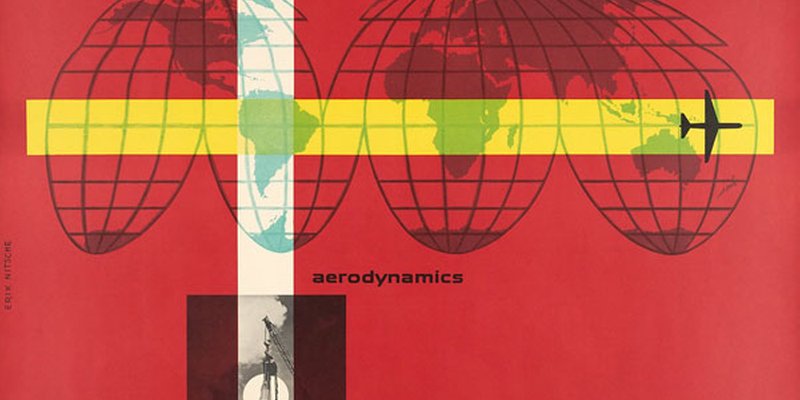 General Dynamics was founded in 1952 through the merger of Electric Boat and Canadair Ltd, and was at the forefront of scientific research including nuclear energy, electricity, electronics, aerodynamics and space dynamics.

In 1953 the company’s future was decided by President Eisenhower’s historic “Atoms for Peace” speech at the United Nations General Assembly in New York in which he suggested the creation of an international atomic energy agency which, instead of using atomic energy exclusively for war, would also use it for peaceful means. General Dynamics asked its director of communications, Erik Nitsche, to produce a series of posters for the public to promote the numerous research branches related to peaceful nuclear technologies.

Erik Nitsche (1908-1998) studied in Lausanne, Switzerland and moved to the United States at the age of 26, where he had a successful career as graphic designer and art director at General Dynamics.

The first International Conference on the Peaceful Uses of Atomic Energy took place at the seat of the United Nations in Geneva from 8-25 August 1955. The result of this conference was the creation in 1956 of the International Atomic Energy Agency (IAEA), which was ratified by almost all states during the second conference in 1958.

The first poster of the series featured the flag pyramid symbolizing all the nations united under the atom. Three series of posters were printed between 1955 and 1960. 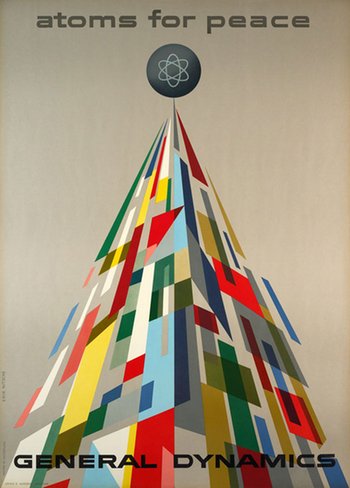 The first poster of the series featured the flag pyramid symbolizing all the nations united under the atom. Three series of posters were printed between 1955 and 1960.

The first series with the Atoms for Peace title consists of a first set of six posters printed in 1955 in six languages to promote the pacific use of atomic energy on the occasion of the International Conference on the Peaceful Uses of Atomic Energy, and a second set of five posters in different languages printed in 1956.

The most celebrated of the General Dynamics posters is the “Hydrodynamics” poster that depicts a nautilus shell with a terrestrial globe at its centre and the USS Nautilus (the first nuclear propelled submarine that was launched in 1954) emerging from its spiral.

The “Astrodynamics” poster features Atoms for Peace in Russian and illustrates ballistic research and rockets being propelled into orbit.

With its title in German, the silhouetted planes shown in the “Aerodynamics” poster are B-36s put into service in 1954. Tentative measures were made during the Cold War to fly these modified nuclear propelled planes, which were capable of staying airborne for a week.

This “Electrodynamics” poster depicts nuclear electricity lighting up the world. At the centre of the light bulb is the symbol of the atom.

The mosaic of concentric circles in “Solar Dynamics” represents the scientific study of the sun and the associated research for energy production using solar panelled mirrors.

The “Radiation Dynamics” poster depicts the latest research into the mutation and radiation of vegetables (a premonition of the genetic manipulations of today), with Atoms for Peace written in Arabic.

The more abstract “Nuclear Fusion” poster in French has multiple layers of colour to suggest the compression of matter. This compression effect is reinforced by two opposing arrows that heat the plutonium bar red hot.

“... instead of using atomic energy exclusively for war, would also use it for peaceful means...” 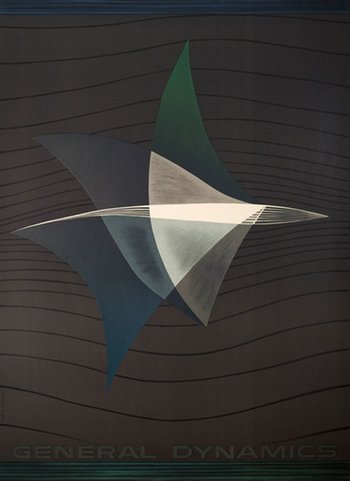 “Exploring the Universe First Steps into Space” represents the wing of a plane in a wind tunnel with its graphic flux of air.

Exploring the Universe was the theme of the second series of posters designed between 1957 and 1958 to illustrate the research activities of the company for the second International Conference on the Peaceful Uses of Atomic Energy in Geneva in 1958. On this occasion, the atomic reactor TRIGA was presented to the public.

“Exploring the Universe First Steps into Space” represents the wing of a plane in a wind tunnel with its graphic flux of air.

The text in “Exploring the Universe Weather Control” refers to the research undertaken to understand, control and modify the weather through chemical means, symbolized here by the beaker.

In “Exploring the Universe Worlds Without End” a small rocket is propelled into the enormity of galaxies and black holes.

A third series from 1958 to 1960 aimed to promote the different transportation, energy and industrial products divisions.

TRIGA is an acronym for Training Research Isotopes General Atomics and is also the name of a small nuclear reactor.

Erik Nitsche superimposed portions of concentric circles that represent radio signals or radar emissions over the contours of a map. With incredible vision, it seems he might have designed the wifi logo years before its birth.

In “Convair 880 the World’s Fastest Jetliner,” the earth’s globe is lifted by the nations and their many colours that are crossed by the General Dynamics 880 plane.

1961 Exhibition at the Rockefeller Plaza

A final series of six posters was published for the large General Dynamics retrospective exhibition at the Rockefeller Plaza in 1961.

These are a unique series of posters that represent a time when the democratic nature of Modernist abstract art was diametrically opposed to the rigid Social Realism of the Soviet Union. Inside that political landscape, Nitsche’s Swiss design bonded perfectly with America’s economic power.